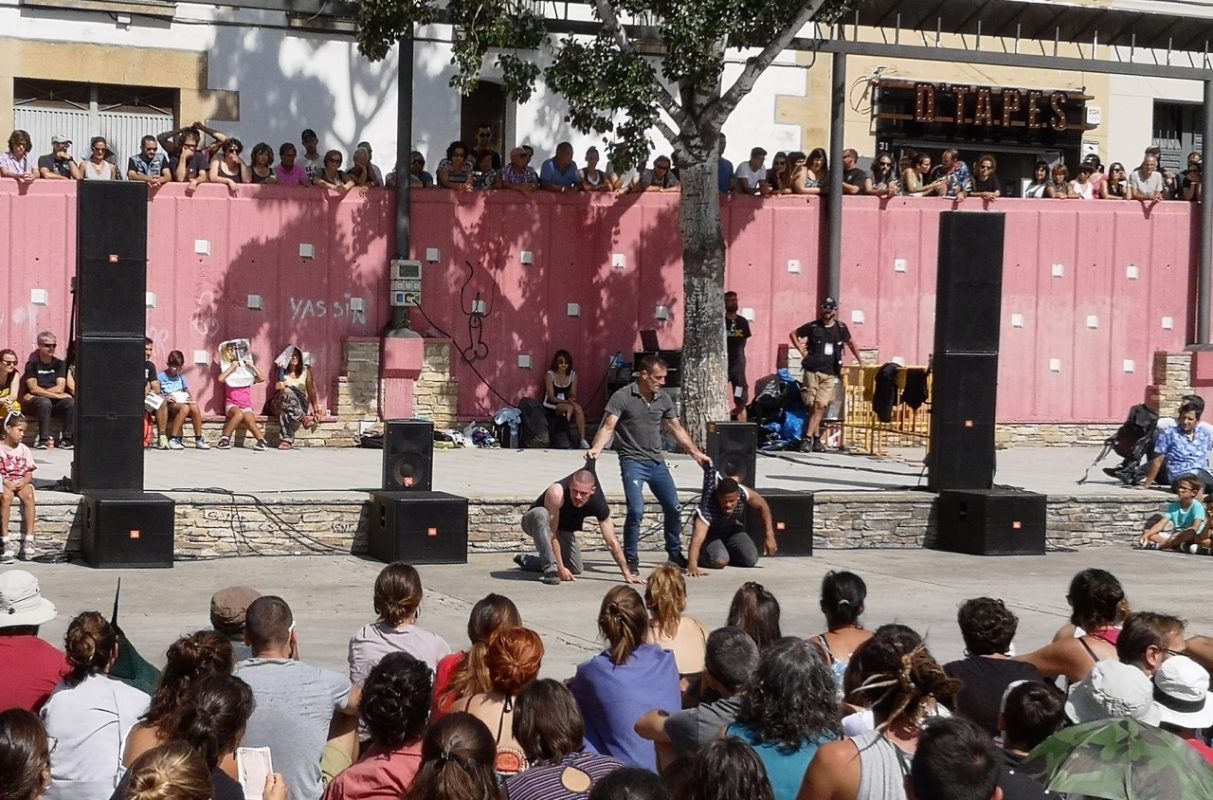 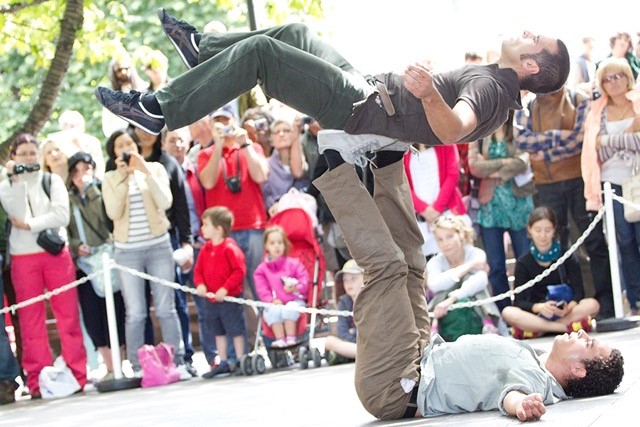 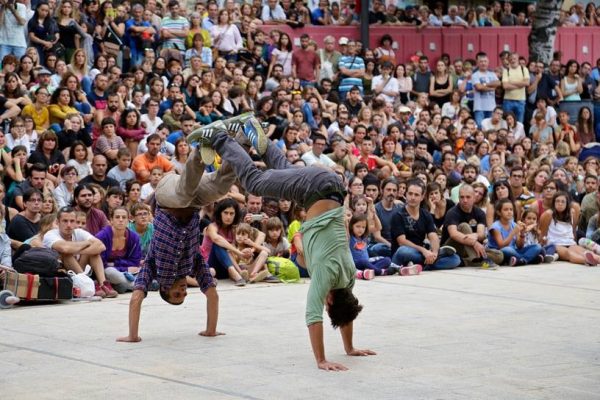 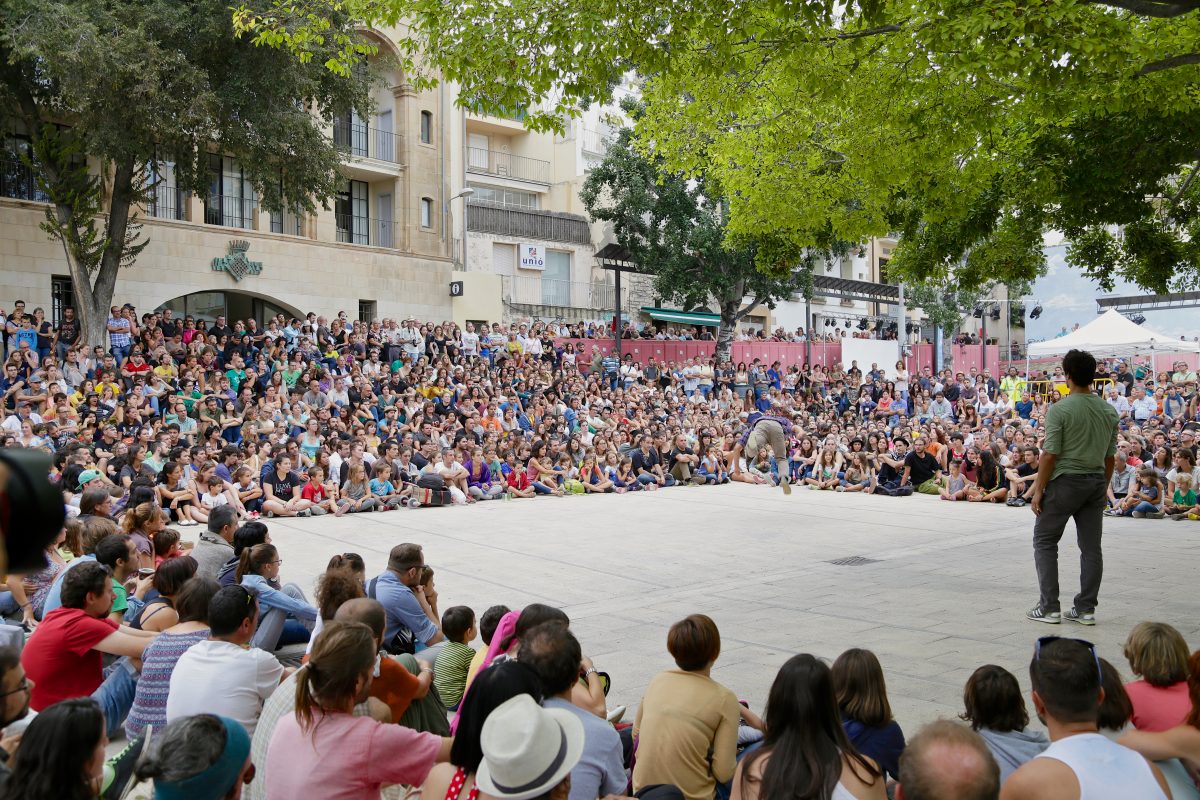 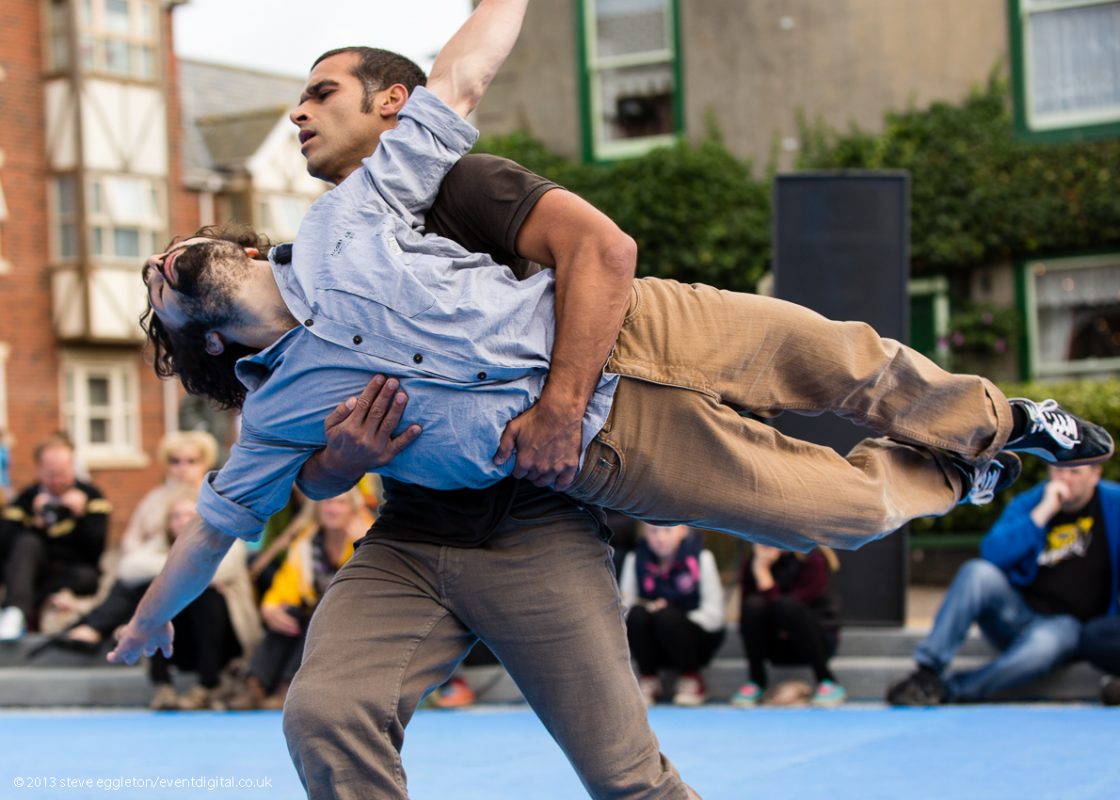 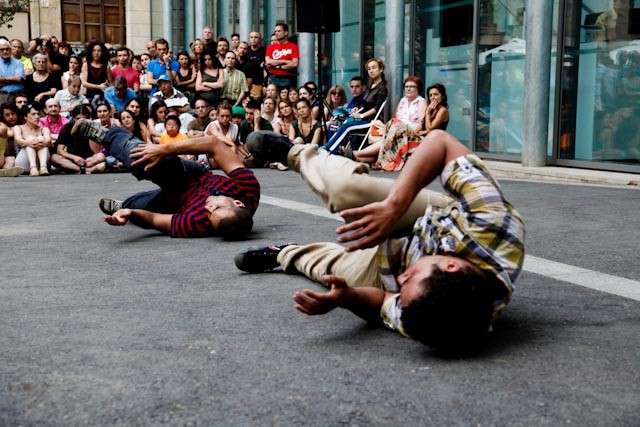 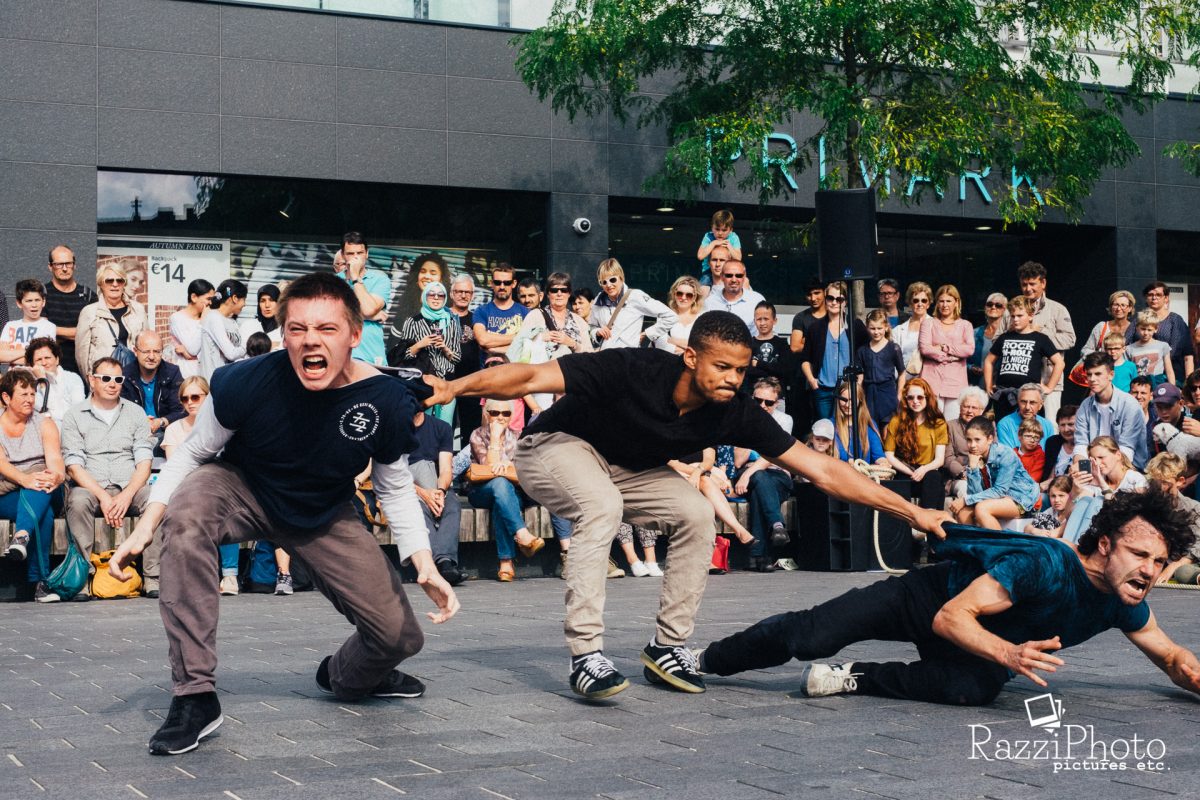 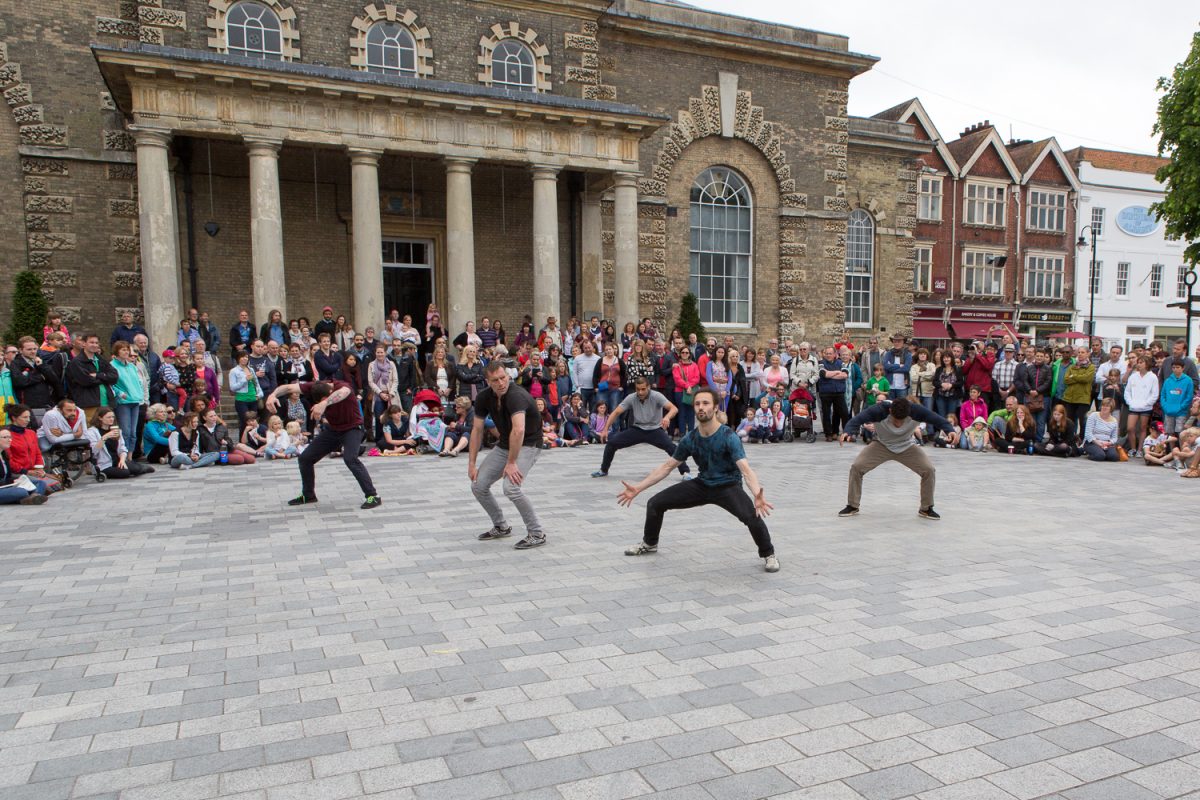 Usually around about now, Company Chameleon embarks on its spring/summer tour, where we perform our outdoor work at festivals across the globe.  For obvious reasons, our plans are different this year.

So, in this issue of Sunday Reads, we decided to take the time and reflect on some of our favourite outdoor touring moments. Our Co-Artistic Director, Anthony Missen, looks back and shares his memories.

Ten years ago, Kevin and I created our first outdoor work called Search and Find. One of the reasons we made the piece was to introduce the types of people we grew up around to what we do.

Neither of us had many friends or family members that you’d call regular theatre goers, and we were keen to find a way to introduce people to our work, in contexts other than on a stage in a theatre.  Back then, we imagined a grassy bank outside a housing estate or a nearby field, where we’d set up a sound system and share what we do.

Fast forward ten years, and we’ve been around the world and back, presenting outdoor work in festivals large and small in the grounds of castles, parks, fields, playgrounds, city and town squares. There are so many memories to cherish through these performances and here are some of the most memorable.

The first might seem odd, but it’s deeply personal.

I developed a ritual before we start each outdoor show where we come together in a circle.  Arms around each other, we take a few minutes to settle together, to log into each other’s breath, and to sink into the calm and stillness.   It’s a profoundly comforting ritual, and one where so much is shared, non-verbally.

I’ve always thought of our outdoor shows as an experience rather than a performance. There is an honesty and openness about them.  We invite the audience in and give, receive and communicate throughout. This takes a particular preparation, and not one where we are buoyed up and pumped with an energy that makes it hard to let people in.

I had a couple of years away from performing after having back surgery. I made my return performing in my outdoor creation, Of Man And Beast, at Fira Tarrega in Spain – an amazing festival and always a delight to be at. The cast, all men, were dancers I’ve performed with over many years.

To take part in this ritual before we performed at Fira Tarrega was really something. In those moments I felt totally supported by the team and immensely thankful. At the same time, I felt the anticipation and presence of the audience, who were patiently waiting for what would momentarily unfold.

Rewind five years, and there’s a picture that’s seared in my memory. We were performing Push at a festival called SIRF in Stockton. Quite close to the start a man passed, tattooed and shirtless, a bag of chips in one hand, the other hand on a pushchair, a toddler in tow, and a couple of other kids hanging off his ankles.

At the end of the show I noticed him again and it took me by surprise that he had managed to stand and watch the show even with all his kids jumping about him. I spoke to him and he said, “I don’t know what that was, but….” His words then stopped, and he started nodding affirmatively.  I had a great sense of the power dance in that moment.

Another memory is from Barcelona at a festival called Dies De Danza, where we presented Search and Find. This was a huge festival. One of the shows was in an enclosed square. It started with me doing a solo. I walked out to begin, and was confronted with an enormous image of myself, a live feed for the people near the back to see all the action.  There were two further screens on either side.  To say this was distracting is a huge understatement! It’s probably the most self-conscious I’d felt performing since my youth dance theatre days, I’ll never forget it!

I can’t really single out one outdoor show as my favourite. I will say that every time I get together with the guys to do Of Man And Beast, it’s a sheer delight – the rehearsals, the travelling, the shows, the aftermath and everything in between.

Kevin and I are blessed to work with some of the most generous, beautiful, and breathtakingly talented people you’ll find. Lee Clayden, Thomasin Gülgeç, Taylor Benjamin, Theo Fapohunda, David Colley, Gustavo Oliveira and Reece Marshall – these guys don’t hold back a drop, and the result is thrilling.

We all work incredibly hard, but never for a moment does it feel like anything close to work! Everyone believes in the power of this piece, and what’s possible to communicate between us and those watching in the time warp of 30 minutes. Every time is enormously satisfying, and it always feel slightly sad when it’s time to depart.

One-year Thomasin Gülgeç and I spent a whole summer touring France and Italy. We sweated so much from performing in the heat!  One of the stops was at a festival in Libourne, France. Shows on the first two days went ahead as planned. On the third day, a storm came, and most shows were cancelled.

Word had spread that our show was one to watch.  Very impromptu, we were told they’d found us a location in a covered area leading into a car park. We got there and more and more people kept on arriving. In the end there was a crowd of a staggering size.

That show was really something; I have no words to express why.  Even with a storm looming you could hear a pin drop, the atmosphere felt electric and so focused. There followed a delightfully rapturous applause that seemed to last an age.

I could go on, but I think it better that you enjoy your Sunday, thanks for reading!

Be part of the Chameleon family and receive our regular newsletter to keep up-to-date with our news.

"10 was such a wonderful experience - I cant wait to see more of your incredible work!" "Effortless grace, strength, humour and athleticism - a visual treat!" "We brought 65 young people to your performance tonight - every single one loved it! What an amazing show!" "This show reminded me why I dance and what I’m constantly working towards! Thank you for this experience!" "Such beauty in the small moments of this show - please don't stop doing what you’re doing"

Wow, what a brilliant Autumn UK Tour of 10!  We’ve enjoyed every minute and can’t believe it’s over!

It’s been amazing to receive such wonderful comments, thank you to everyone for their feedback.